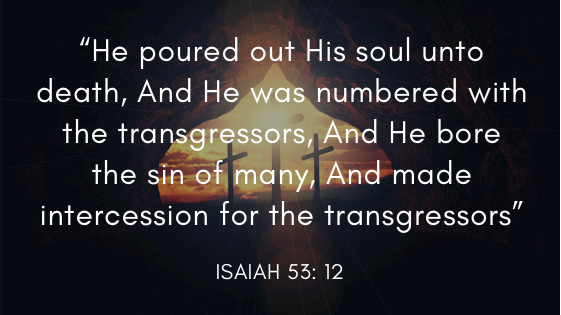 Thought for the Week - 4th April

Within this prophetic picture of the crucifixion that was to come to our Lord Jesus Christ, we see something of the worst of humanity, the truth of the sin of man, the reality that we are the transgressors. We are the those that were numbered upon Christ as He poured out His soul for us in intercession unto death.

The wickedness of man is unmasked in various ways in those around Jesus at the time of His death. The Pharisees were hiding behind their laws and appearances while savagely campaigning for Christ to suffer the most horrific and brutal death a person could face at that time. A torturous way to die thought up by man. Of course, the Pharisees were not willing to physically dirty their own hands in this and set out to influence others. We see the wrestling conscience of Pilot fail under the pressure, justifying his actions, and washing his hands of the situation. I imagine there would have been a people passively going about their business not wanting to open their eyes to the atrocities taking place around them. Then there were those who carried out the act itself, lashing Christ with a flesh ripping bone inlaid whip, before watching his torn body drag a cross big enough to hang a man onfor miles, and then physically drive nails into his hands and feet.

Who was it that ultimately crucified Christ? It was you and it was me.

The worst of humanity runs through us all, our names and sins were marked in the wounds inflicted. He bore the unfathomable weight of all sin upon himself and in His sacrifice freed us from its bondage. When that stone rolled away death was overcome in the glorious power of the resurrection of Jesus Christ our Saviour.

For 40 days after Christ’s resurrection, He ministered to His scattered disciples and ascended to the Father in heaven. There are accounts and prophecy of ascension in the old testament, and Stephen witnessed that He actually saw our ascended Lord.

Do you think of Christ as being ascended? Or gaze into the vastness with vague or no real sight of Christ alive and in His dwelling place?

It is important that we understand something of the horrific gravity of what Christ endured on the cross, our individual part to play in that, and the sin of humanity as a whole. It is also important that this is not the limit of our sight; we should see our Lord in His ascended rightful place.

He is Risen. Christ’s ascension finished his redemptive work on Earth. He sits at the right hand of God and will come again to lead us into glory. We will be with Him in the eternal dwelling place as the bride of Christ.