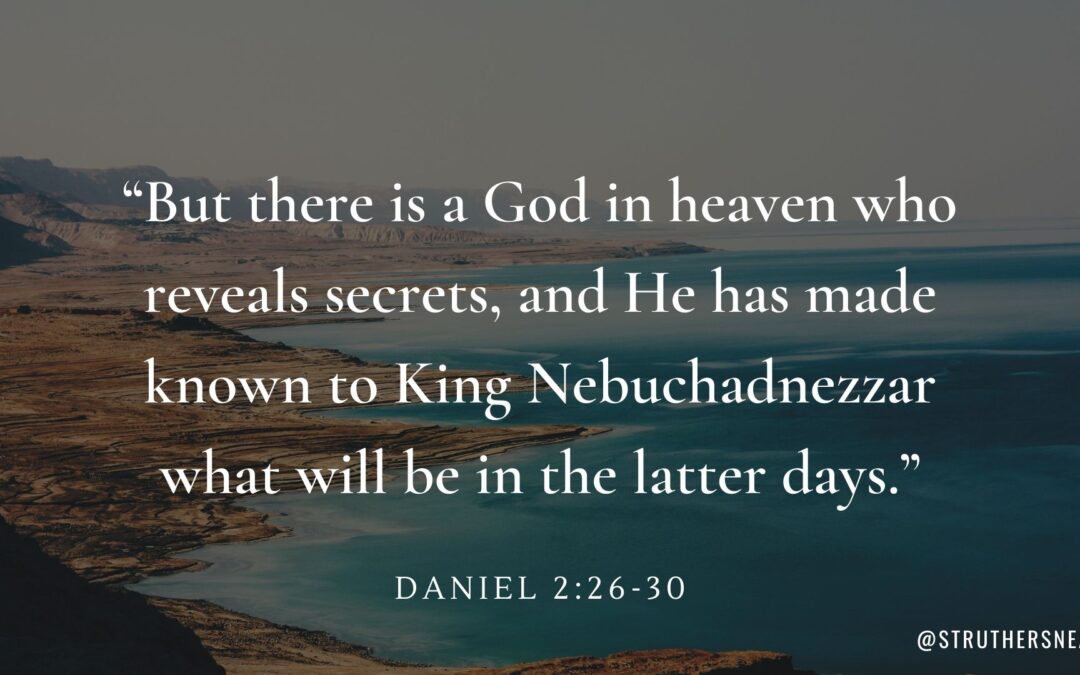 Thought for the Week - 4th April

Pastor Gareth Watkins
Daniel 2:26-30
But there is a God in heaven who reveals secrets, and He has made known to King Nebuchadnezzar what will be in the latter days.
Life can seem very complicated at times can’t it? So much so that we can lose sight of the way through. However, in the midst of all the complications, God is there.

In the times when King Nebuchadnezzar had besieged Judah and held the Israelites in captivity, we read of Daniel a captive servant to the King. This was a time of much difficulty for the children of God. They lived now among the Babylonians who engaged in depraved sin and idol worship, and were under the rule of a ruthless King. These were very complicated times for God’s people indeed. They would not have seen nor understood why God had allowed these things, they might have even asked, ‘where is God in this?’ ‘Has He forgotten His promises to us?’

Some of us will ask these same questions at times when we can’t see God in our circumstances.

In the middle of all the chaos under Nebuchadnezzar, there was the voice of God calling on a humble slave boy Daniel. Not the wise men of the day or the prophesiers, but a young enslaved Israelite. Through him God spoke a prophesy into the nation and all the generations since.

Daniel was faced with an impossible task at the Kings request; to tell him what he had dreamed and give an interpretation of it. Failure would have no doubt meant certain death for him and his peers. So what did he do? He sought God. He didn’t try to plan, control, or stand in his own strength. He simply went to God with his request. He knew he couldn’t give Nebuchadnezzar what he wanted, he knew he had no wisdom or ability of his own, but he trusted that God would speak into the situation.

We can get so tangled up as we try to navigate our difficulties, yet so often we miss the simplest way through them – God’s way.

How often have we tried to plan our way out of things, or panicked acting in haste only to further complicate matters? And not just in our difficulties, when we minister to others, pray, witness, or support a work, we cannot do this of our own making. We are to do so under His authority, for His glory, and for the good of others.

To find our way through life’s challenges, or be used as an instrument of God, we are to simply come before Him. Nothing more is required of us than to seek His voice and desire His will and not our own.