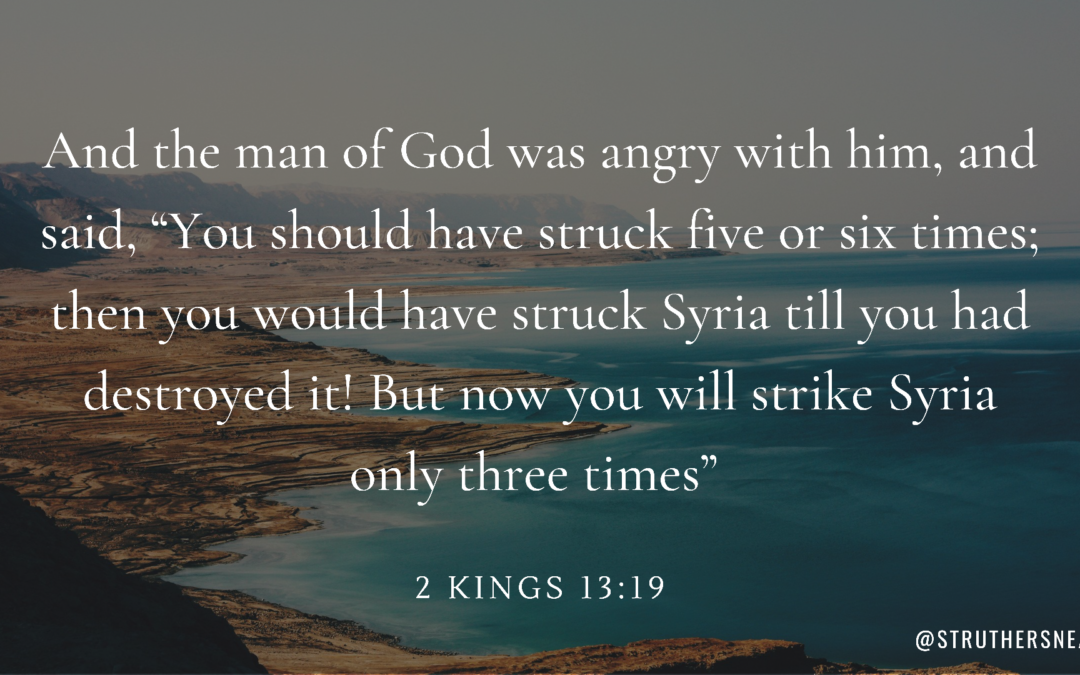 Thought for the Week - 4th October

And the man of God was angry with him, and said, “You should have struck five or six times; then you would have struck Syria till you had destroyed it! But now you will strike Syria only three times”.

When Judea was under attack from Syria, King Joash turned to Elisha the great prophet for help. Elisha, now old in age and struck with the illness that would cause his death, knew the King was living a life of sin and idolatry. In the presence of this man of God Joash broke down and wept. He was no longer the strong leader he once was; he had lost the blessing of God upon his life. All the sin and occultic behaviour had corroded away the victory and power he once knew. Elisha instructed him to pick up some arrows and beat the floor for deliverance from the Syrian army. The King took the arrows, beat the floor 3 times, and then stopped. This tells us that he had given up. He half-heartedly followed the instructions Elisha gave and I can imagine him limply hitting the floor. This is hardly the action of a man in desperation to seek help from God through the greatest prophet of that time. You’d think he would have beaten the ground with all the might he could muster! Elisha was angry with him, had he have struck the ground 5 or 6 times the Syrian army would have surely been defeated. The King’s lack of honour for Elisha’s instruction and his apathetic efforts, prevented him from receiving the mighty victory over his enemies that was close within his reach.

Much like the King, our zeal and commitment for the things of God can get lost somewhere in the appeal of the world, sin, desires, or simply in the mundane of day-to-day life. How much do we miss out on? How much more is there for each of us when we stop being blown around in our difficulties through our own double mindedness and choose to stand firm?

We must state our position to follow God all the days of our lives come what may. How much more at peace and fulfilled we can be compared to the state that sadly many Christians choose to remain in today. Don’t allow the things of this world to creep in and corrode the blessings that have been entrusted to you. Take your stand and victory will be yours time and time again.

‘’And whatever you do, do it heartily, as to the Lord and not to men’’