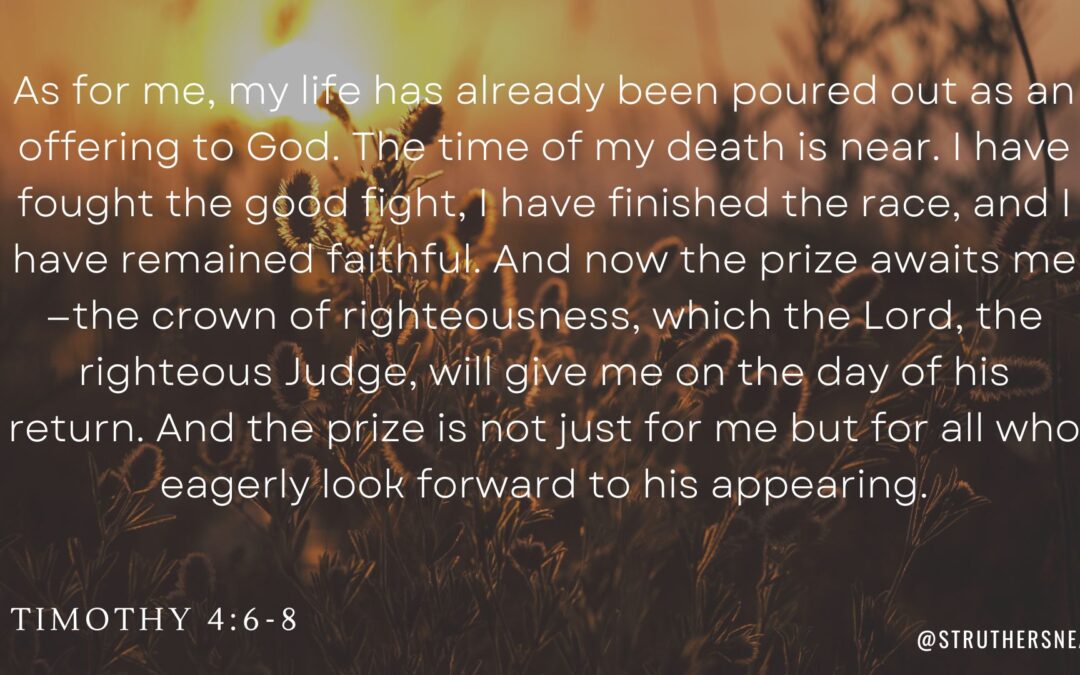 Thought for the Week - 6th June

As for me, my life has already been poured out as an offering to God. The time of my death is near. I have fought the good fight, I have finished the race, and I have remained faithful. And now the prize awaits me—the crown of righteousness, which the Lord, the righteous Judge, will give me on the day of his return. And the prize is not just for me but for all who eagerly look forward to his appearing.

Most of us will be familiar with Paul’s miraculous salvation. Before this his name was Saul. Saul was a cruel oppressor of Christians, unrecognisable to the humble and fervent man of God he became. Once saved, he held on fast to all that God had given him right up until he died and went on to glory. He laid down his life to serve God and serve others. He fearlessly preached the gospel in the face of real danger, and led many to Christ planting early churches as he travelled through many countries.

In his last days, Paul had been held in a dungeon, people had turned against him, and he was waiting to be executed. We can only begin to imagine how we might think or feel in such a circumstance, yet Paul was not defeated nor downcast in spirit. His eyes were set on Christ and his final writings were a statement of victory as he ‘’eagerly looked forward to Christ’s appearing.’’

Paul held fast throughout his walk, he continued to remember who he once was and God’s goodness and mercy towards him. As he approached the end, he said, ‘’I have fought the good fight, I have finished the race, and I have remained faithful.’’ This is complete victory and success over death, sin, and darkness. The things of this world had no bearing on him. Paul knew that he had succeeded in the only accomplishment that matters, the crown of righteousness that awaited him in heaven.

What are you measuring your success by? Status, money, family, career? What accomplishments are you chasing, or prize are you running towards?

Successes measured by worldly standards will fade to nothing. Let us not be lives wasted striving for temporal things, but like Paul, let’s long for Jesus’ appearing. The things that await us in eternity, far exceed the things that we have denied ourselves or given up now.

What is the state of your heart? Are you caught up in worldly pursuits, or longing for Christ’s appearing with confidence that a crown of righteousness awaits you?

Friends, ensure that when the time comes for you to stand before the righteous Judge, you do so victoriously and having faithfully fought the good fight. Be encouraged, and look forward with hope.

‘’And we are instructed to turn from godless living and sinful pleasures. We should live in this evil world with wisdom, righteousness, and devotion to God, while we look forward with hope to that wonderful day when the glory of our great God and Savior, Jesus Christ, will be revealed.’’ (Titus 2:11-13)