Thought for the Week - 8th November

Praise be to the Lord,
who has not let us be torn by their teeth.
We have escaped like a bird
from the fowler’s snare;
the snare has been broken,
and we have escaped.
Our help is in the name of the Lord,
the Maker of heaven and earth.

This week we come together to remember those who have gone before and fought for us; fought so we can have freedom and we can live in a democratic country without fear of anything.

This year it’s the 70th anniversary of the end of WW2 and nearly 100 years anniversary of WW1. Every single person was affected – whether they were fighting in battle or not.  The men putting their lives on the line to fight the enemy, the men working hard to secure the home-front, women working hard in munitions, the women left alone as single parents, and the children evacuated to the country.  It affected the whole of the country… everybody was touched.

But the battle was also being fought in the heavenlies, in the spiritual realms.  Not everyone realised there was a different war being fought – a war that continues today.

For our struggle is not against flesh and blood, but against the rulers,

and against the spiritual forces of evil in the heavenly realms.

Every war originates with the devil.  And in WW2, a battle of prayer was being fought without people realising it.  God had laid the responsibility for winning this war with Christian men.

In Swansea, Rees Howells, the intercessor, was called upon to fight and win the battle. Even in March 1936, Rees Howells was declaring Hitler’s threat to Britain, 3 years before the war even started.  God said that only intercession would avail and called for intercessors.  He needed people to give up their lives like those on the front, to battle in the spiritual realm, and He’d give victory.  People made that surrender and right through the war, 100 intercessors prayed.  Their prayer stopped the War when it did and gave us victory.

Winston Churchill was actually in contact with Rees Howells.  He consulted to ask what God was asking and doing.  He knew that only God could get our country victory over the enemy.  In his war memoirs, he visited his Air Marshall whose defence against the Luftwaffe was going badly.  When Churchill enquired about their reserves, the Air Marshall said he had none.  Churchill’s response was “well I might”.  Minutes later the enemy was going home and the action ended.  There was no earthly reason why the Luftwaffe would turn around when victory was so close to their grasp.  Even the Air Marshall acknowledged the divine intervention of God!

A greater battle was done 2000 years ago, for the freedom of men, women and children – so we can stand here today in freedom and in liberty.  Because of what Christ did on the cross at Calvary. He had no thought for Himself.  All that He suffered on that cross was so that we could have freedom.

God is looking for those intercessors, for those people who can help those lives be free.  The enemy has told so many people lies. He tells them they don’t need Christ and can do it on their own.  But we can’t friends, we can’t do it on our own.  Just as Winston Churchill couldn’t win the Battle of Britain on his own, neither can we.  The battle is still exactly the same; the battle is as savage and vicious as it was then.

There is a saviour who died and who loves us with an everlasting love.  He’s always loved us – He’s always loved you.  From before the world was made, He chose us, He chose you.  Don’t be thinking “this isn’t for me”.  You are not reading this by accident.  Why does God want you here?  Because He wants you to know that He loves you.  He loves you more than you realise.  He loves you so much that He died for you, and He has a life for you that’s worth living.

You may have turned your back on it, you may not even know that it’s there.  But He loves you. All those guards that you put up, He wants to bring them down.  He wants to set the prisoner free. That’s our God!  Our God is in the business of setting people free.  He wants us to live in the victory.  He wants us to live in that freedom that’s His.  If we’ve never tasted freedom and if we don’t know the freedom that Christ can bring, He wants you to know it. He’s called you to this.

There is so much that God has called us to! Come into the place where we are used by God for God, where we bring a whole country into victory!

We know that spiritually the country is going to be in a horrific state, is it now, and He’s looking for lives to be laying on the altar now, as they did then.  There is a different battle, there is a different call – but there is the same Christ who’s promised victory!  As He did 70 years ago.  As He did a 100 years ago.  He’s promising in 2015 “I will give you the victory”.

Every one of us is called to be a soldier in God’s army.  He wants fighters in spiritual realms!

I’m glad today that I belong to God… and more importantly that He is on our side! 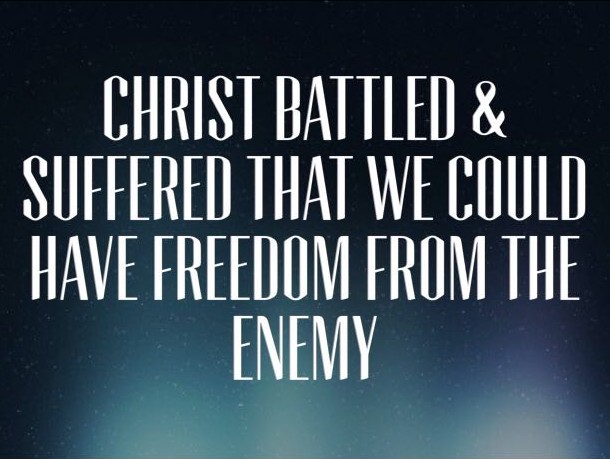