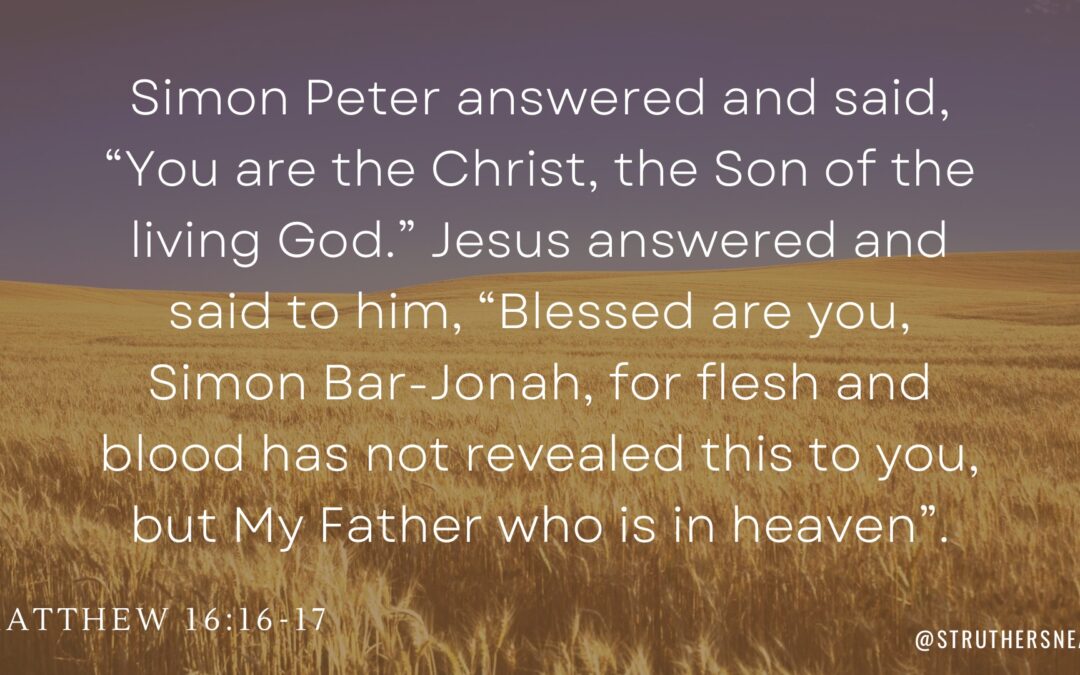 Thought for the Week - 15th August

Simon Peter answered and said,
“You are the Christ,
the Son of the living God.”
Jesus answered and said to him,
“Blessed are you, Simon Bar-Jonah,
for flesh and blood
has not revealed this to you,
but My Father who is in heaven.”
When I read these verses recently, my attention was drawn to Peter. Peter was an uneducated man and a husband, someone perhaps unremarkable by society’s standards of the time. He was however a disciple of Christ, and though others remained uncertain, speculating who Jesus was and where He came from, Peter knew in his heart that He was ”Christ, the Son of the living God”. This kind of absolute certainty isn’t achievable through one’s own logic and reasoning, but is knowledge revealed into the hearts of men by God Himself.

Peter would have heard many voices around him, he’d have grown up hearing the teachings of the Pharisees, known the scriptures and Jewish law, and spent time with Jesus as a follower. Yet, it was only through a personal encounter with God, that Peter could profess and believe with such deep conviction.

This is true for us also, we might have grown up in a church and at a head level understand who Jesus is, but it’s not enough. We need the miraculous revelation of truth imparted to us by the Holy Spirit. What comes out of our lips isn’t an indicator to others that we have met with God; when we have had a real encounter, the knowledge of light and truth can be seen within us.

God broke through to Peter, and Jesus recognising this called him blessed, but some of the Sadducees and Pharisees challenged Christ, baiting Him to show them signs from heaven on which they might evidence His identity. They’d have seen the healing miracles Jesus performed, and heard the witness testimonies of others, yet they remained unsatisfied in their narrow reasoning, and empty in their logic, for they held their thoughts higher than God’s, and their ways higher than His ways.

We too come across people who rely so much on their own understanding that they can’t accept the truth, nor humble themselves enough for God to reveal it to them. We are not free of that danger ourselves though, we might have had that encounter and believe with all our heart, but later as God is speaking to us, or pressing on something in need of change, think we know better and disobey in our spirit, rendering us stuck.

When we are in need of a breakthrough in our spiritual lives, we must seek God, leaning not our own understanding, and as He begins to open up to us the revelations of heaven, we are to respond to Him, accepting what has been revealed, and proclaim that we believe. How we respond to what God is saying, is key to breaking through the barriers within, and receiving the blessing that He has for us.

We are a blessed people indeed when we can say with such conviction as Peter, that Jesus Christ is the Son of God, our Saviour and our Deliverer.

Matthew 10:33
But whoever denies Me before men, him I will also deny before My Father who is in heaven.