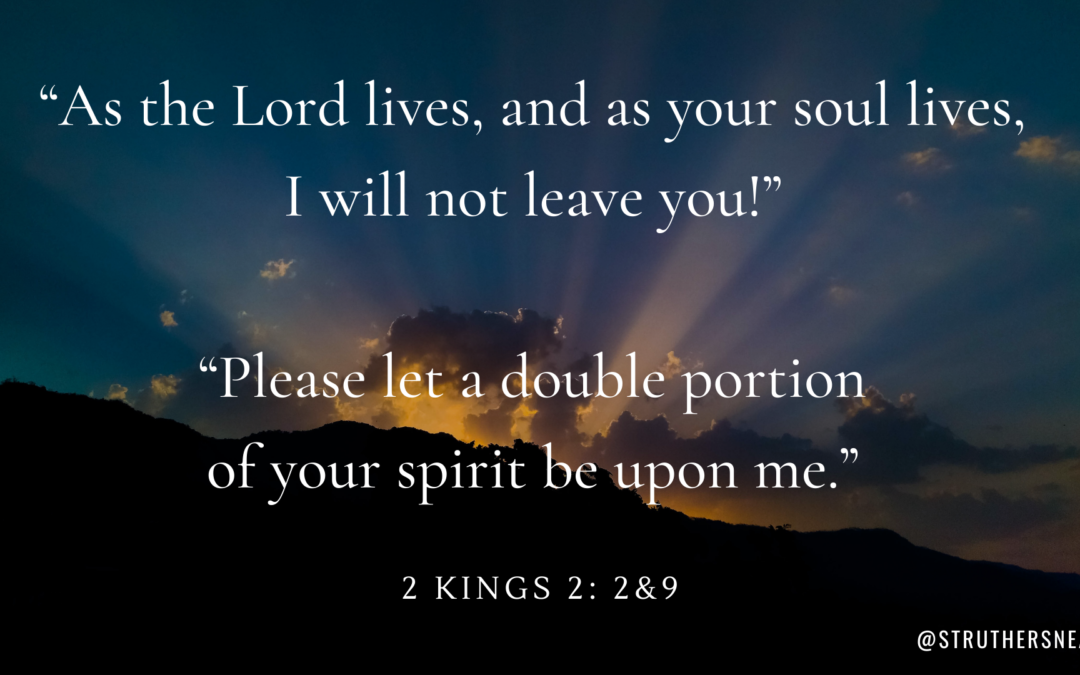 Thought for the Week - 20th September

As the Lord lives, and as your soul lives, I will not leave you!
2 KINGS 2: 9
Please let a double portion of your spirit be upon me.

Following on from last week on getting the best out of what God has for us, and being the best version of ourselves in Him, Elisha knew his own failings and his need for the Holy Spirt to achieve God’s best.

Elisha served Elijah for 10 years before he fully came into his calling. During this time a transformation of his nature took place to mould him into someone more like Christ. In humility his heart become one with a love for others, and he performed many miracles in his submission to God’s will. He had to deny himself and know his complete dependency on the Holy Spirit. He couldn’t deliver what God was asking of him in his own strength or ability.

When Elijah asked Elisha in the moments before he would be taken up to heaven, ‘‘what can I do for you?’’ Elisha asked for a double portion of his Spirit. As we established last week a double portion of Elijah’s spirit would have been an enormous ask.

Is it right to ask for such a blessing? It occurred to me that Elisha having real insight of his own weakness, yet knowing the call upon his life, knew that to be able to receive the mantle from Elijah and carry that onwards to fulfil his purpose in God, he would need a double portion of the anointing Elijah had.

Elisha desired this so much that he had to cling to Elijah despite any discouragement or obstacle right up to that last moment. Elisha didn’t desire riches, power, authority, or success, he longed to know the Living God and to accomplish all he had been called for.

He wasn’t asking for blessings to call his own, but for the anointing to come upon him in great measure so that he could carry on Elijah’s work and carry the blessing forward for the benefit of others.

Do we ask for enough or ask only for ourselves? Or do we ask for the anointing power of God to come upon us and seek to do His will? God is waiting to pour out His Spirit upon us if we would only come and ask Him in the right way.

“For everyone to whom much is given, from him much will be required; and to whom much has been committed, of him they will ask the more.”