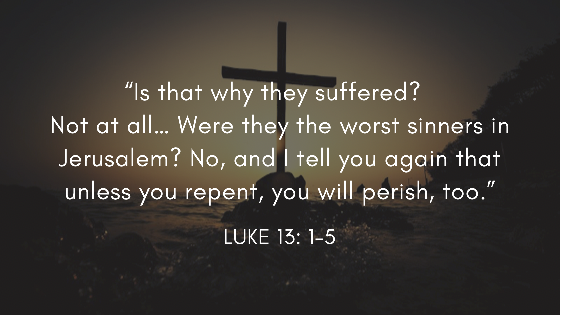 Thought for the Week - 24th May

Is that why they suffered? Not at all..

…Were they the worst sinners in Jerusalem? No, and I tell you again that unless you repent, you will perish, too.

Horatio Spafford wrote the well-loved hymn ‘’It is Well With My Soul’’ under extreme circumstances. He suffered the tragic loss of his children, and it was in the midst of pain that he was deeply moved by the love of God and found his inner wellness. After this, He and his wife were blessed in many ways, yet they came to know more suffering. They were struck with illness, bereavement, and rejection of those who should have held them up in fellowship. These things, as desperately crushing as they would have been, were not what came to define them. It was not the trauma that lived on in this family, but the victory of God as they attended to the needy in love and service. They didn’t allow themselves to become consumed by bitterness, they used their pain to bless other lives.

We are not immune from tragedy; we live in a fallen world and these events are not determined by the measure of sin in the sufferer. Jesus asked, ‘’were they the worst sinners?, Is that why they suffered?’’We don’t suffer because of what we do, and it is not what has happened to us, nor the why’s and the how’s that are important, it is who we are before God that matters, and our relationship with Him that defines us.

Joseph knew much suffering, he was rejected, imprisoned, enslaved and accused, yet he wasn’t consumed by these things. We don’t read that he wallowed in pity for his lot or laid in sorrow bereft of the life he didn’t have. How different a story his might have been if this were the case, or worse no story of his to read at all! He was led through all the hardship to the appointed time when he became the man who God defined him to be, anointed and raised up to rule over Egypt. Had he been pulled from the pit sooner, we could question whether he would have been ready to take up his calling.

The why’s are rarely answered in suffering, and the why’s in themselves can consume and bind. Don’t allow these things to prevent you becoming the person who God intends you to be. Examine yourself before Him, examine what it is that defines you, and if it’s not your relationship with God then lay it before Him humbly and honestly. We are not all called to be Joseph, but each of us have an outward impact in the furthering of the kingdom of God, and each of us are called for His good. It is who we are in Him that defines us.