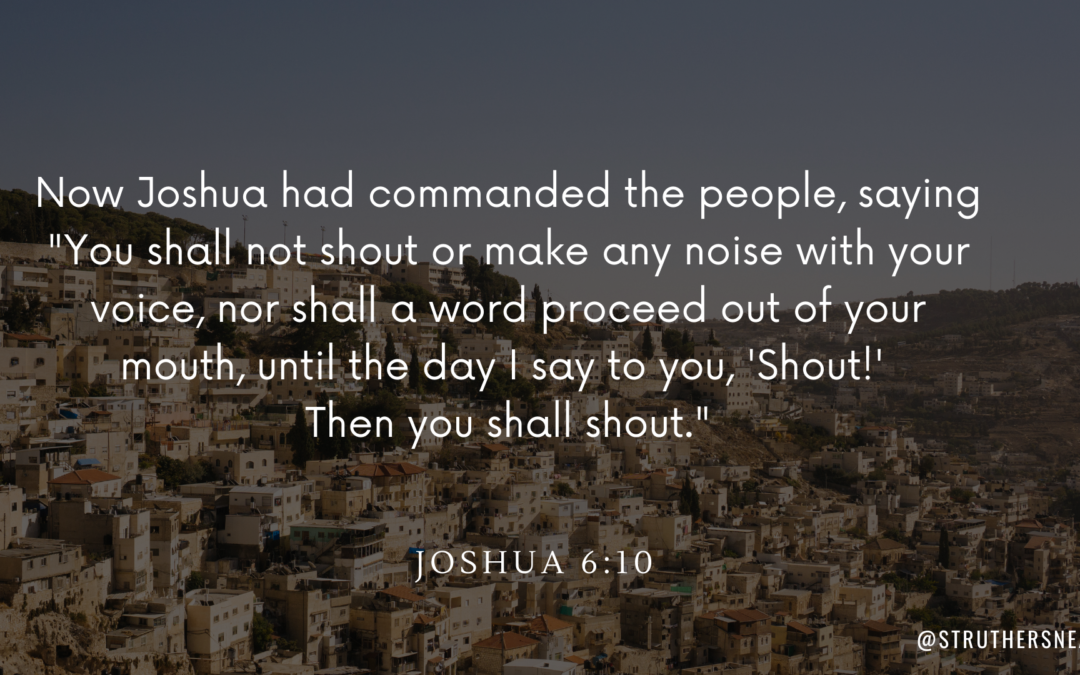 Thought for the Week – 28th March

Now Joshua had commanded the people, saying, “You shall not shout or make any noise with your voice, nor shall a word proceed out of your mouth, until the day I say to you, ‘Shout!’ Then you shall shout.”

Many of us will be familiar with the story of when the impenetrable walls of Jericho came crashing to the ground. It was a city steeped in sin, yet they feared the Israelites from behind their fortress walls because they knew that God was with them.

Joshua and the Israelites brought the city to destruction but only by the authority of God. As we have learnt over the last few weeks, Joshua had been obedient to God’s will, and in doing so God was faithful to him and the people.

Joshua was once Moses’s apprentice. Moses was his master under God and Joshua followed him faithfully without question. He learned from the failings of the previous generation; they didn’t enter the promised land because of their disobedience and murmurings against Moses, and in turn, against God. It was because of Joshua’s complete reliance on God, his heart of holiness and righteousness, obedience and standing before Him, that he was chosen to lead the people.

Joshua knew what it was to be in God’s presence, he fell on his face in complete reverence before the commander of the Lord. He followed His instruction to the letter and instructed the Israelites in like manner. They marched around the city once a day for 6 days, and on the 7th day they marched 7 times. They were to do this without uttering a word. They had to remain silent until the instruction was given to shout. Had just one murmured during the daily grind of the march, those walls would not have fallen.

Is it not true that our murmurings and disobedience can create discord within a work? What miracles are withheld from us because of our pulling against the grain? What walls in our own lives still stand because of our unwillingness to yield our will to God’s?

In our own daily grind we can begin to murmur spreading doubt and opposition as things rise up from within. It is however in the very walking, submitting, and remaining quiet before God that we learn and grow in our faith. God knows what we are going through, and He blesses us as He sees us die to self with our eyes focused on Him.

Don’t despise the day of small things, let us regard these times as precious. It is in these that we are being changed, prepared, and learning lessons that we cannot see from one day to the next. Bit by bit ground is being gained as we take each step in quiet obedience.

God wants to bring each one of us into complete freedom. When we are struggling to move forward, it is often because there is something in our lives that we are holding onto. Whether it be sin, hurt, idols or aspirations, God wants to break it all down. As the children of Israel had to destroy every single thing in the city of Jericho, we have to destroy every sin that comes between us and God. He doesn’t want anything to stand between Him and us else we may never know the full riches that He has to give.

Whatever your walls, let the God who brought down Jericho’s walls in an instant, tear them down and lead you out into the spacious places.