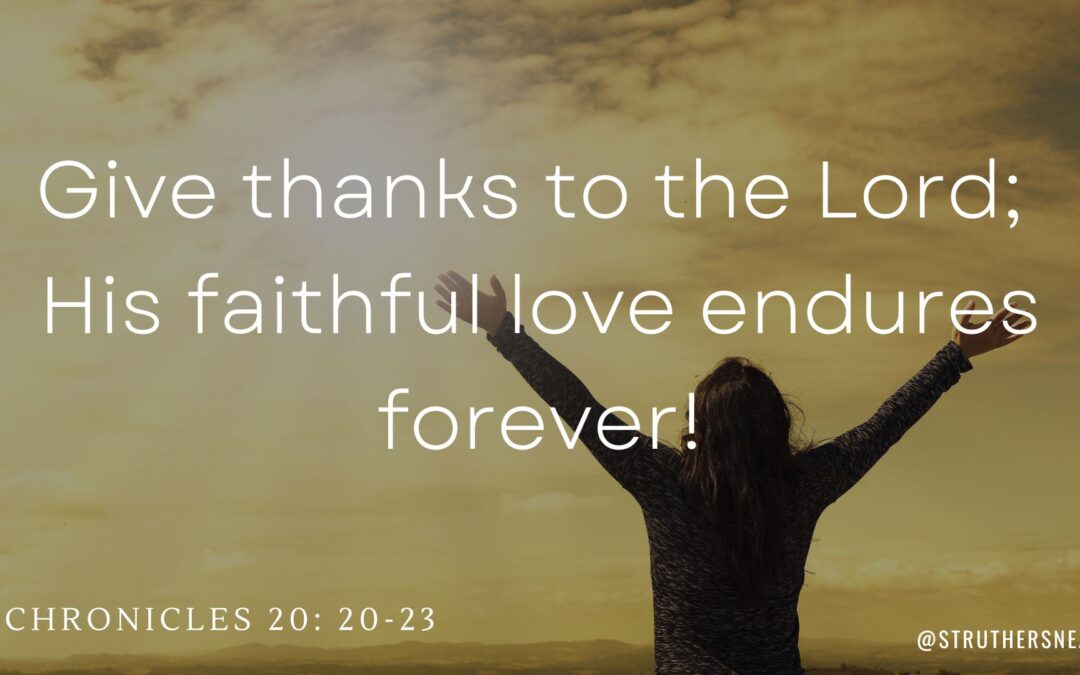 Thought for the Week - 31st October

Give thanks to the Lord;
His faithful love endures forever!
God wants us to laugh, be filled with joy, and have a lightness to our spirit. So many of us live under the weight of the world, depressed, stressed and empty, but this is not of God.

If there was ever a man who would have been justified to be in complete despair in his circumstance, it was Job. Yet, Job’s eyes were fixed on God, he did not waiver through the onslaught of the enemy’s attempt to make him fall, nor would he curse God despite losing everything. Job remained steadfast in his faith and having endured all, God brought him through the valley, restored his life, and blessed him more abundantly than before.

People everywhere are struggling through all manner of hardships, I have listened to the difficulties of a few just this week, businesses failing, terrible sickness, and another in turmoil with her mental health. These are just a few that continue to struggle on wading through life’s trials, yet they refuse to come to God for help. How saddening is it to know that each of these people could be freed from their torment and filled with joy, if they would only turn to God.

”Behold, God will not cast away the blameless, nor will He uphold the evildoers. He will yet fill your mouth with laughing, And your lips with rejoicing.” (Job 8:20)

It is not just unbelievers who don’t know the freedom of joy in their hearts, many Christians walk around burdened and oppressed when they needn’t do. When our hearts have hardened and lips have replaced praise with bitterness, we cut ourselves off from receiving all that the Holy Spirit has to give.

When King Jehoshaphat led Judah into battle, he knew they were unlikely to succeed in their own strength. They were going up against 3 nations, yet Jehoshaphat also knew that if they stood firm in God the battle was already won. He instructed Judah to go forth lifting their voices in praise to the Lord. The moment they began to sing, their enemies turned on each other and the battle was won.

Though we may not find ourselves in that type of battle, there is a spiritual battle going on for each of our souls. We must guard ourselves from demonic influence, despondency, depression, discouragement and distress, and push through into praise and thanksgiving despite how we feel.

These battles can often feel much bigger than us, but to be victorious and thriving, we need to do as Job and Jehoshaphat did. Lift our voices in praise and thanksgiving, keep away from sin, cut off unholy alliances to anyone that would draw us away from God, be obedient, and stand firm. If we do this, we will remain responsive and receiving of God’s help to overcome anything that would come against us.

It is not just all about us either, we all have family, friends, and neighbours, who are still under the heel of Satan. We are each a part of God’s army, and have been called as individuals to take our place in the furthering of His kingdom. We cannot do this in our own strength, but with open hearts and mouths filled with praise, nothing that is not of God can prevail. The battle is His.