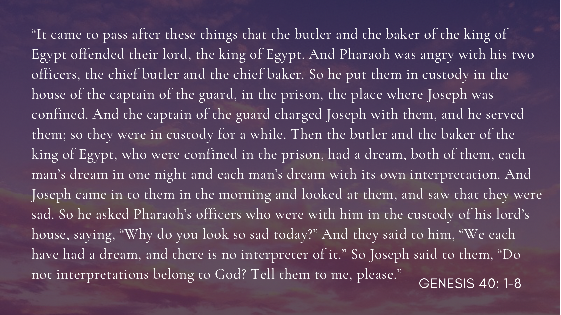 Thought for the Week - 23rd August

It came to pass after these things that the butler and the baker of the king of Egypt offended their lord, the king of Egypt. And Pharaoh was angry with his two officers, the chief butler and the chief baker. So he put them in custody in the house of the captain of the guard, in the prison, the place where Joseph was confined. And the captain of the guard charged Joseph with them, and he served them; so they were in custody for a while. Then the butler and the baker of the king of Egypt, who were confined in the prison, had a dream, both of them, each man’s dream in one night and each man’s dream with its own interpretation. And Joseph came in to them in the morning and looked at them, and saw that they were sad. So he asked Pharaoh’s officers who were with him in the custody of his lord’s house, saying, “Why do you look so sad today?” And they said to him, “We each have had a dream, and there is no interpreter of it.” So Joseph said to them, “Do not interpretations belong to God? Tell them to me, please.

Joseph endured much hardship in his young life, he had every reason to be bitter, angry, to complain and to blame. Here he is imprisoned and a servant, and not yet Joseph the great leader and man of God he came to be. Yet, in the midst of it all, Joseph continued to live by the freedom within in his heart, not by his mistreatment, the walls around him, or the sufferings of his past. He lived by hope in the living God.   Joseph took the initiative to be free; he chose it.   Though abused and confined, where many would turn against everyone, and turn against God, he chose to minister to the butler and the baker, a pair seemingly far more fortunate than himself.   Do we want to be free and to live in hope? God has already given us this, but we must choose to live in it. As we choose to live by His hope and not our circumstances, He will be with us just as He was with Joseph.   Satan would have been around Joseph just as he is around us, seeking to destroy all that is good, whispering lies, and attempting to blur his sight. He chose not to listen to the deceit, kept himself upright, and stood firm. He was a man who walked with God and God walked with him. His character was formed not by the hardships he endured, but by his relationship with God in them, and his choice to live in the freedom and hope God gives.   We have the same choice to make. Would you continue to live battered and downtrodden by your circumstance? Or live in unconfinable freedom and hope? There is much to miss out on by staying consumed in our troubles, the initiative is with us as Christians to live full and Godly lives whatever our circumstances.